If you don’t make mistakes, you’re not working on hard enough problems. And that’s a big mistake – Frank Wilczek - Nobel Prize in Physics 2004

I’m fascinated by systems that use error to improve.

These are Nassim Nicholas Taleb’s antifragile systems, which use error/pain/volatility/mistakes to improve. This is an observable paradox - a sign of a fundamental truth. Examples of antifragile systems include business, evolutionary learning, biological evolution, training neural networks and also learning data science.

I’ve made many mistakes while learning, working and teaching data science. I see those same mistakes repeated by my students at Data Science Retreat.

Patterns exist in the mistakes made learning data science - hopefully sharing them will help you to only make them once. But do make them - the mistake is useful for progress.

Not plotting the target

Data scientists use supervised machine learning as a tool to predict a target from features.

This target can be either a number (regression) or a type (classification), and is a prediction that can be used to optimize business decisions.

Understanding the distribution of your target is a key step in data exploration, and will inform many decisions the data scientist makes in the future about what techniques to use.

For regression, a histogram will show if the target distribution is multimodal and highlight outliers:

The histogram shows the four distributions that generated this dataset - two normal and two uniform. 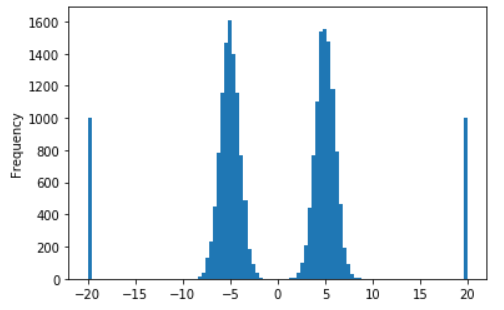 In classification you want to know how balanced your classes are - we can see this using a bar chart: 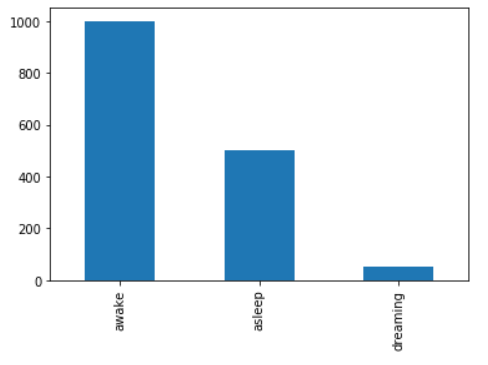 Both of these plots are simple, and should be a part of all supervised learning projects.

Examples of dimensionality reduction include:

The value of dimensionality reduction is that business decisions are made in low dimensional spaces. A list of 50 numbers about a customer becomes an estimate of lifetime value, which can be used to take an action. Prediction becomes control.

The curse of dimensionality

To understand the curse of dimensionality we need to reason about the space (aka volume) that data occupies. We can imagine a dense dataset - a large number of diverse samples within a small volume. We can also imagine a sparse dataset - a small number of samples in a large volume.

What happens to the density of a dataset as we add dimensions? It becomes less dense, because the data is now more spread out. The problem is that adding a dimension makes understanding the size of the space exponentially larger.

Why? Because this new dimension needs to be understood in relation to every other combination of all the existing dimensions. The curse of dimensionality is this exponential increase in the size of the space that occurs as we add dimensions:

Getting a theoretical understanding of dimensionality is step one. Next is noticing where it appears in the daily practice of data science. An experienced data scientist will be take actions to avoid it. Prediction becomes control.

An expensive mistake of the new data scientist is excessive grid searching. Now that we understand the curse of dimensionality, we now that adding a single new value in our grid means a massive increase in the number of models you need to train.

A related mistake is narrow grid searches - a logarithmic scale will be more informative than a small linear range:

I had this misunderstanding when working for the first six months as a data scientist. Seeing the results in computer vision, where deep neural networks are state of the art, I thought that any neural network were ideal for any high dimensionality data.

The first mistake was not realizing that convolution provides useful inductive bias, specific to the structure found in images. The second mistake was not appreciating the exponential cost of adding columns (commonly done when one-hot encoding). Adding columns is expensive!

This is especially common for new data scientists working on regression problems - reporting a range of metrics (such as mean absolute error, mean absolute percentage error, root mean squared error etc) rather than a single metric.

Combine this with reporting a test & train error (or test & train per cross validation fold), the number of metrics becomes too many to glance at and make decisions with. Pick one metric that best aligns with your business goal and stick with it - reduce the dimensionality of your metrics so you can take actions with them.

One of the pleasures of being a data scientist is the availability of high quality implementations of models in scikit-learn. This can however be a problem when new data scientists repeatedly train a suite of models (say linear, svms and random forests) without a deliberate reason why these models should be looked at in parallel. At most this should occur a few times, after which a single model is chosen and optimized.

Why is a random forest a good first model? A few reasons:

Not seeing the interaction between prediction and control

The interaction between prediction and control drives reinforcement learning. The better you are able to predict the world, the better you can control it.

This is also a working definition of a data scientist - making predictions that lead to action.

Error is the sum of bias, variance and noise. Noise is unmanageable - no model can use it.

Bias is a lack of signal - the model misses seeing relationships that can be use to predict the target. This is underfitting. Bias can be reduced by increasing model capacity (either through more layers / trees, a different architecture or more features).

Variance is confusing noise for signal - patterns in the training data that will not appear in the data at test time. This is overfitting. Variance can be reduced by adding training data.

It is possible to have a model that is high bias & high variance - to simultaneously over and underfit. Most of the time you will train a model with some bias & high variance, and your options will usually result in a tradeoff between bias & variance.

Another option is more data - this should reduce variance, but will have no effect on bias. More data can even make bias worse - it gives your model the chance to give highly precise, wrong answers - see Statistical Thinking for Data Science, SciPy 2015, Chris Fonnesbeck.

Not thinking about where error comes from

Three common sources of error are in a dataset are:

Is is the first step to understand these three sources of error while in statistics class - harder when you are working with a real dataset.

IID is another lens through which to look at sources of error. IID is an assumption that data is independent & identically distributed. Non-independent sampling causes sampling bias, non-identical distributions is an example of sampling error.

An obsession with the width & depth of fully connected neural nets

We saw above in Not understanding bias & variance that model capacity & architecture reduce model bias. Yet when it comes to fully connected (aka feedforward aka dense) neural nets, the architecture doesn’t matter so much. As long as you give the model enough capacity and sensible hyperparameters, it should be able to learn.

A dense network has very little inductive bias - meaning that playing around with architecture isn’t likely to help! Let your gradients work with the capacity you give them.

The correct mindset with a fully connected neural network is a depth of two or three, with a width that is similar to your input (features) and output (target). If this isn’t enough capacity (i.e. your error metrics are indicating bias), consider adding a layer or some width.

Not paying attention to PEP 8

Code is run by computers but it is read, written and rewritten by humans. PEP8 violations scream junior programmer.

The best way to pay attention to PEP8 is via automatic syntax highlighting - a good text editor will have this as a plugin.

Not dropping the target

If you ever get a model with an impossibly low training error, it is likely that your target is a feature.

Learning rate being too high

If there is one hyperparameter worthy of searching over when training neural networks it is learning rate (second is batch size). Setting this too high will make training of neural networks unstable - LSTM’s especially.

Batch size is less intuitive - a smaller batch will mean high variance gradients, but some of the value of using batches is having that variance to break out of local minima.

Not scaling the target or features

Notice this error by seeing a high loss - anything higher than 2-3 is a sign that your target hasn’t been scaled. By scaling, I mean either standardization:

The same requirement for scale applies to features as well (but not for random forests!). Scale matters because an unscaled target or features can lead to large errors, which mean large gradients and hard to tune learning.

Not working with a sample of the data during development

A no-brainer when writing code that processes data - and an expensive mistake in developer time if you run the data processing using your full dataset each time you are fixing a bug.

You can work on a sample of your data roughly using an integer index:

Or more cleanly with a command line argument:

Raw data is holy - it should never be overwritten. This is true both within a program and on disk.

This one isn’t a mistake - but it is a pattern that has made my life dramatically simpler.

One issue you have when developing Python packages is that you don’t know where the user will clone your repo, or where they scripts that execute the code will live. This makes saving and loading data in a portable way difficult.

One solution to this is to create a folder in the user’s $HOME directory, and use it to store data:

This means your work is portable - both to your colleagues and to remote machines.

You May Also Enjoy