Daniel C. Dennett’s From Bacteria to Bach and Back is a book I have read & studied carefully - I look forward to rereading it. 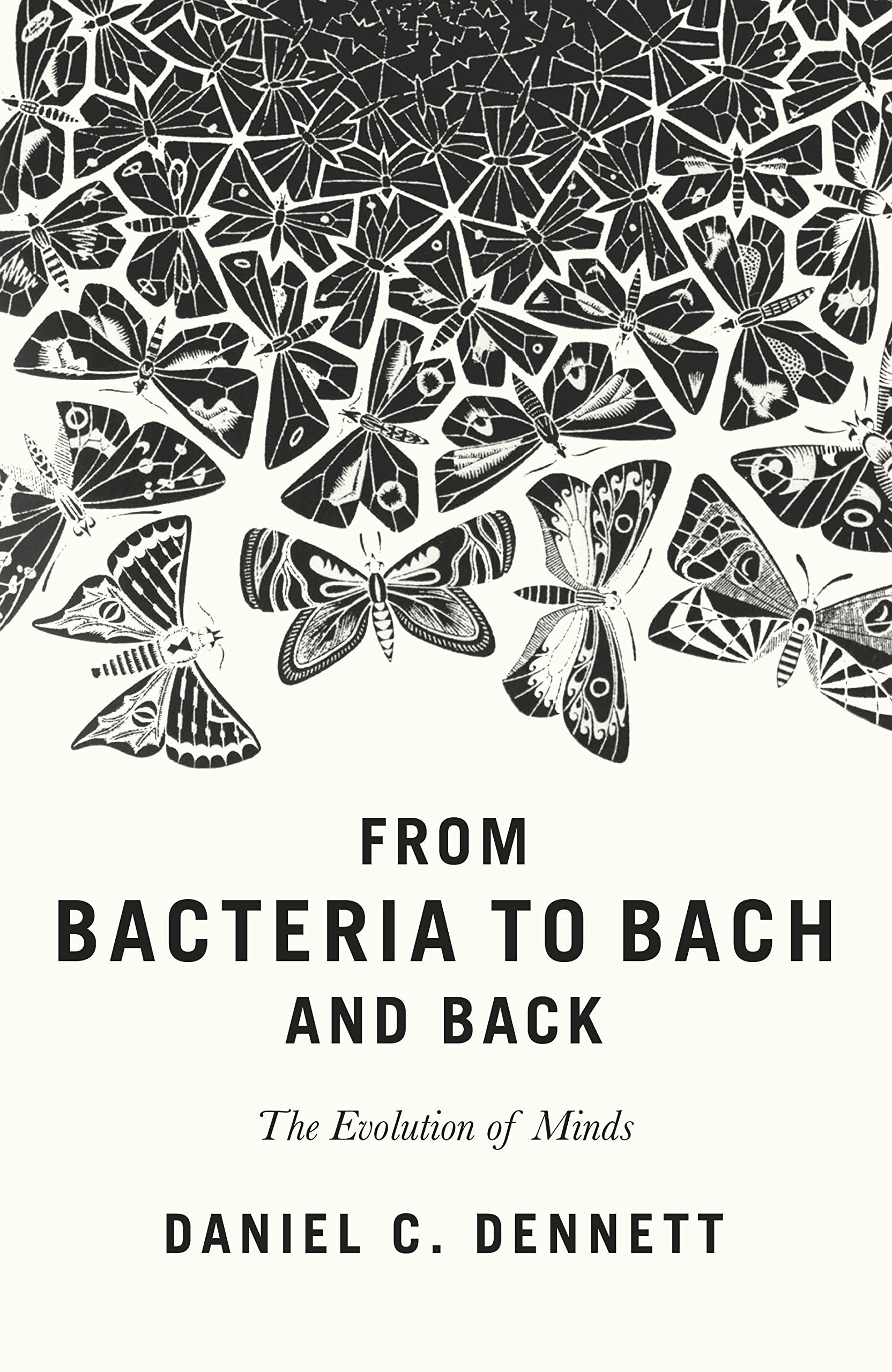 In the book, Dennett introduces four grades of competence. They describe four progressively competent intelligences, that learn through successive applications of trial and error learning.

The four competences are not the central idea of the book. I introduce them here as I have found them invaluable for my understanding computational control algorithms.

They are also useful for teaching. They organize computational control algorithms by asymptotic performance and sample efficiency. The four competences also allow classification of examples such as cells, animals, or humans, which can be related to less familiar computational algorithms.

But what exactly do we mean by competence?

Competence can be contrasted with comprehension, which is the ability to understand. Together both form a useful decomposition of intelligence.

Competence allows an agent to do control - to interact with a system and produce an outcome. The source of this competence is learning from experience through trial and error. This we will call evolutionary learning.

Maybe it would be good for hackers to act more like painters, and regularly start over from scratch - Paul Graham

It is the driving force in our universe and is substrate independent. It occurs in biological evolution, business, training neural networks, and personal development.

There is much to learn from evolutionary learning:

These are lessons to explore another time - for now, we are focused on the four grades of competence. 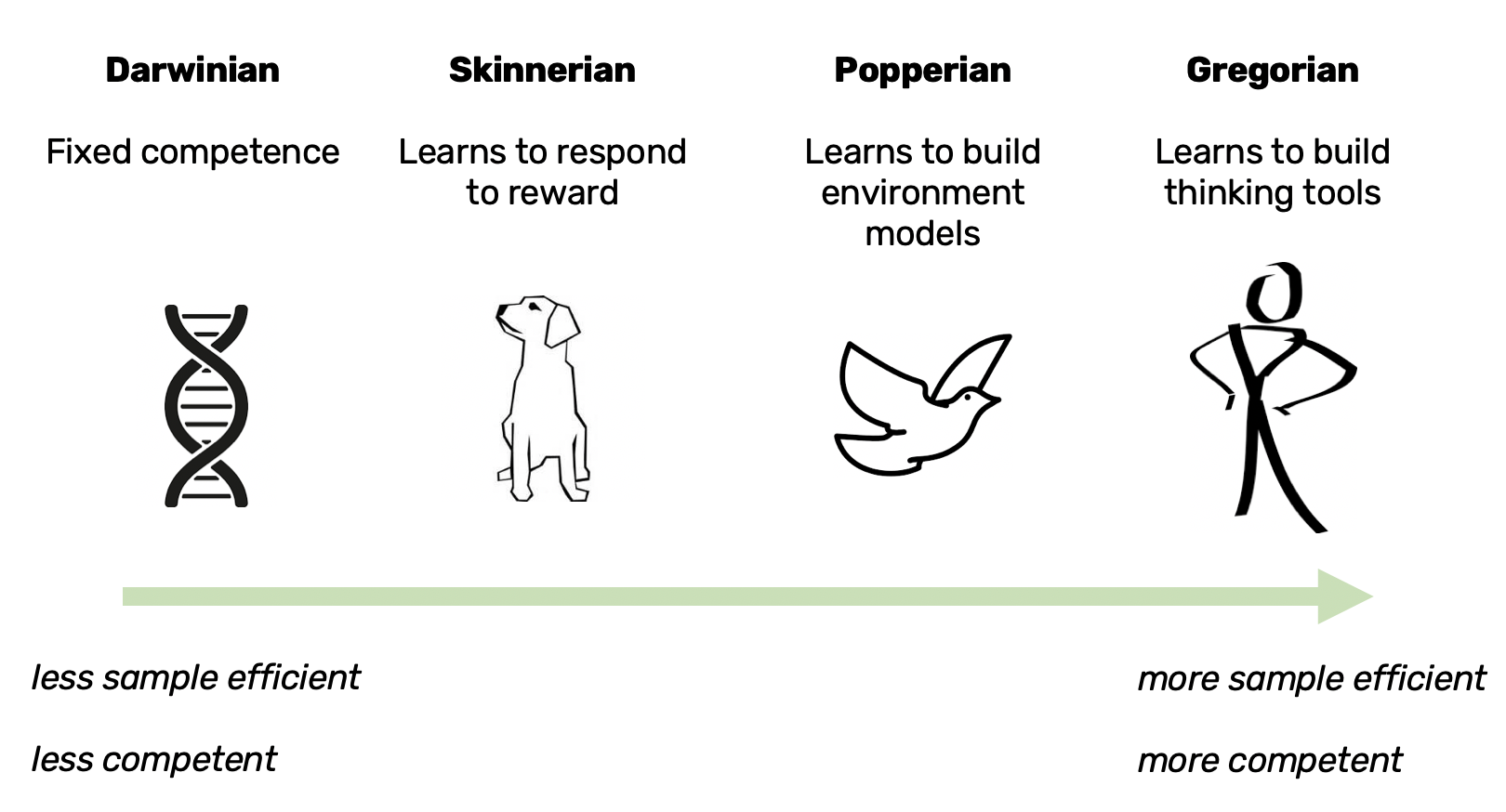 The four competences are successive applications of evolutionary learning. Each agent has all the abilities that the less competent agent had.

The first grade is Darwinian. This agent has pre-designed and fixed competences. It doesn’t improve within it’s lifetime. Improvement happens globally via selection, usually based on a single number, that aggregates across the agent’s entire lifetime.

The second is Skinnerian. This agent improves its behaviour by learning to respond to reinforcement.

The final grade is Gregorian. This agent builds thinking tools, such as arithmetic, constrained optimization, democracy, and computers. Improvement occurs via systematic exploration and higher-order control of mental searches.

The only biological example we have of a Gregorian intelligence is humans. I do not know of a computational method that builds it’s own thinking tools. Now we have introduced our four agents we can compare them.

There several metrics we can use to compare our intelligent agents.

Asymptotic performance measures how an agent performs given unlimited opportunity to sample experience. It is how good an agent can be in the limit and improves as our agent gains more complex competences.

Each of the four agents interacts with the same environment. Interacting with the agent allows an agent to generate data through experience. What the agent does with this data determines how much data it needs. The more an agent squeezes out of each interaction, the less data required.

For example, Darwinian agents improve through selection determined by a single number. For biological evolution, this is how many times an animal has mated. For computational evolution, this is a fitness, such as average reward per episode. These are weak learning signals. This accounts for the poor sample efficiency of agents with Darwinian competences.

The Popperian agent can further improve within its lifetime by learning models of its world. Generating data from these models can be used for planning, or to produce low dimensional representations of the environment.

These dimensions (what is learned and from what data) further illuminate the different approaches of intelligent agents.

In this article, we took a quick look at Daniel C. Dennett’s four grades of competence. They describe four progressively competent intelligences, that learn through successive applications of trial and error learning.

This idea organizes agents that learn by trial and error. It applies to both biological and computational approaches.

It allows understanding of the asymptotic performance and sample efficiency of learning algorithms and highlights two useful dimensions of intelligent agents - what data they use and what they learn from this data.

Of the most competent of our agents, humans are the only biological examples. We have no computational examples.